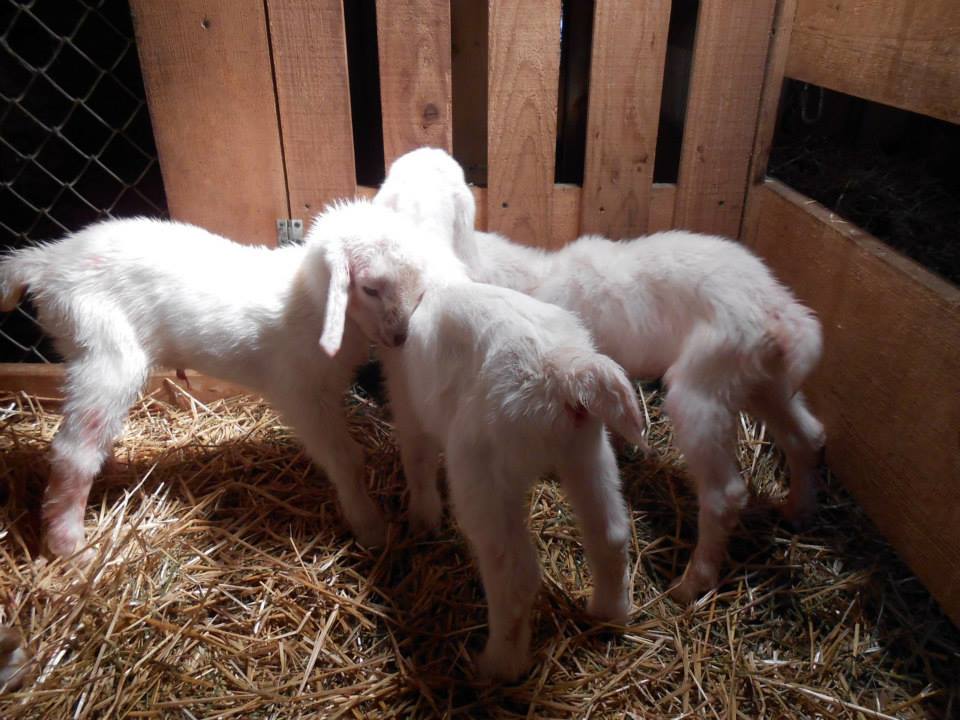 Posted on September 8, 2018August 14, 201912 Comments on How we get more Does than Bucks born from our GoatsPosted in farming, goats

There’s no doubt about it, when it comes to dairy goat breeding most everyone is looking forward to their bred does giving birth to doelings not bucklings. Many consider a successful season if they have at least half doelings born. Wouldn’t it be nice to have a “successful” year each year? Is there really a way to affect the outcome of your kidding?

It is true that you need bucks to reproduce, but not all bucks born should be left intact. It seems that too many bucks are available to be used for breeding so unless that buck has superior genetics, it should be wethered.  I have only ever owned one buck, for just 2 years, and I don’t think that I want to own another.

Doe kids are worth more money than wethers, and are much easier to sell. If my Saanen gives birth to a purebred doe, I can expect to get several hundred more dollars from her than from a wether. Unfortunately many people have mostly bucks born each year, and not enough does to sustain a herd.

Yes, that is my average of does born in the last 7 years! We have had 6 different does on and off and have bred to 5 different bucks. Let’s look at a chart of our results:

Is it science or luck?

The buck determines the sex of your kids, but a lot of other factors are involved. We always make sure that our does are healthy and in good weight. Some people believe that extra weight on the does is not good at breeding time, but I like my animals fat and sassy (or at least fleshy and fun!) My does get fed quality hay and grain all year. My first-time does are usually just about 9 months old when they are bred and are plenty fleshy. I have not had any problems getting any of them bred.

I usually borrow a buck to use for breeding, housing them in a separate pen at my house for about 6 weeks. One year I took my does to someone’s house. Incidentally it was the year that I had the most bucks born. I usually breed during the month of December, right around Christmas.  This may seem late to some people, but I prefer to have my kids born in May.

When the buck arrives at my house, I do not keep him with my does. He goes into a separate, secure pen that is next to them. He is fed well and everyone is monitored closely. When a doe comes into heat I take her to the buck, making sure that she has been in heat for a few hours first. There will be lots of blubbering and flirting through the fence, but wait awhile before you take her in. She should be in standing heat and ready for him. When they are done, she will be more than ready to go back to her own pen.

It may not seem like much, but I believe that these two things are necessary for increasing your does born: breeding your does at a later time in the year and not allowing the buck to breed her right away. The theory is that male sperm are not viable for as long as female sperm. I don’t know if it’s exact science, but it seems to work for us. I will continue to breed in this fashion and see what results we continue to get. If you would like to try this method, I would love to hear about your results!

HOLD THE PHONE!!  Time to edit this post for 2019.  December of 2018, I only bred one doe: I was changing things up a bit and only had one that I wanted kids from. My senior doe is now in retirement after 11 kiddings, and my two new doelings were only 7 months old. My only doe to be bred had, incidentally, only ever had does, but this spring she had……twin bucks!!  So does this change my mind about how to get more does?!? Absolutely not and I’ll tell you why. I borrowed a buck in late November. As soon as he arrived that day, my doe was displaying heat symptoms. I had no idea that she was in heat at the time so  I took her immediately over to the buck’s pen because I was afraid I would miss a heat cycle and have to wait 3 weeks.  I took her out that night after witnessing several breeding attempts.  She started up again the next morning with her flirting and attempts to get to the buck and I realized that I had made a mistake by not waiting until the second day to breed her. I really do believe it would have made a difference.

This fall, I will be breeding 3 and will not panic when the buck comes and immediately put them together. I will update again next spring with what I get!

Yes, we are cheeky little brats that are spoiled a

I love decorating this tiered tray for various hol

Memories of my grandmother. Not complete or finish