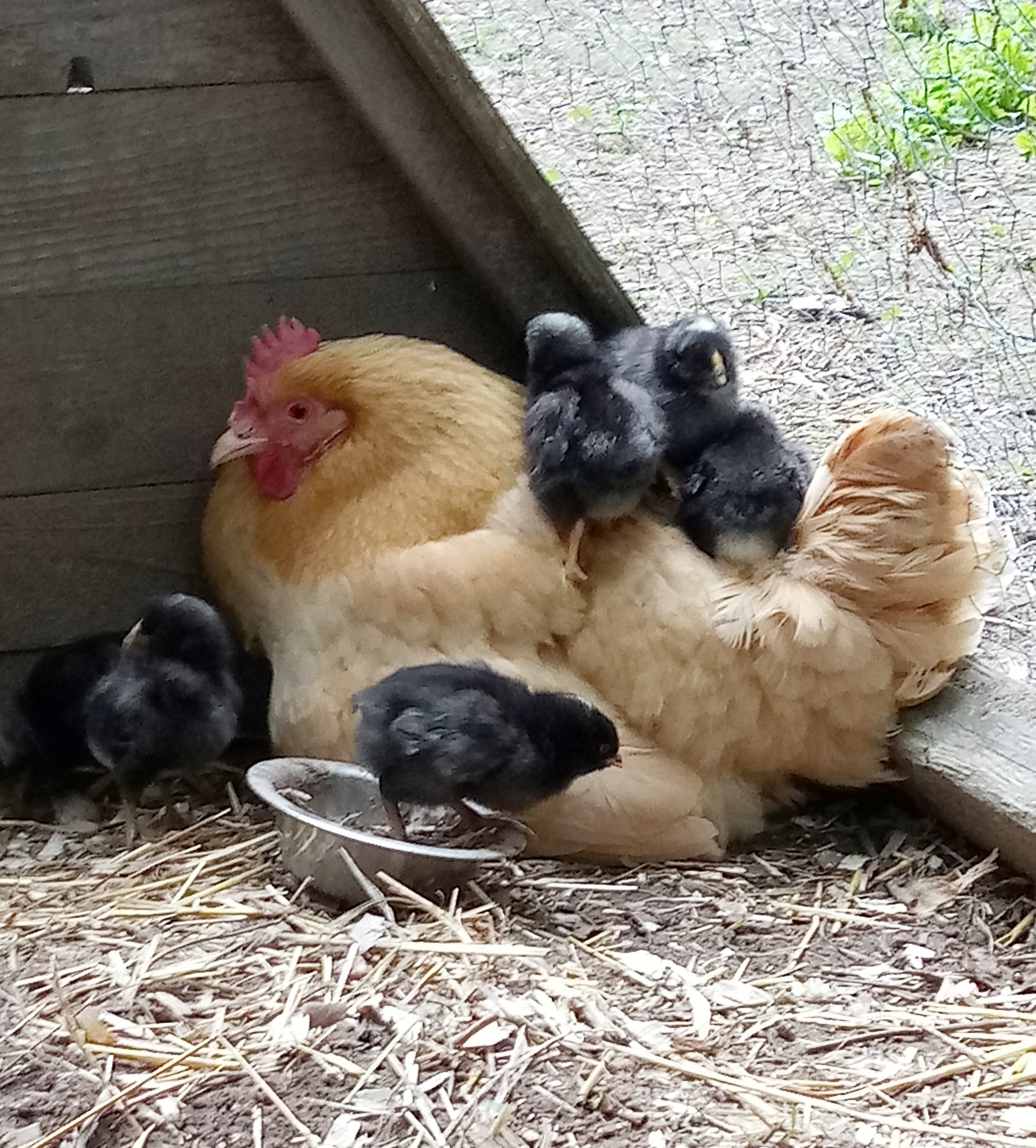 Posted on May 9, 2020May 9, 2020No Comments on The Little Hen That CouldPosted in chickens, farming

One of the things that I love most about having a farm is watching the wonders in nature that you can’t find anywhere else. Spring is my favorite time of year and that’s because it is a time of birth: the plants are coming back to life, seeds are sprouting, and animals are having babies. I like to keep everything as natural as possible, so I let my mommas raise their babies, keeping the bond between mother and offspring intact. I’ve seen the way mothers look at their young as soon as they are born so I try to do everything possible to keep that bond intact. They also are so much better at taking care of their babies than we are.

One animal that I never really thought of as maternal is chickens. Sure they lay eggs, but I never really watched a hen raise any chicks. You need to have a rooster for that to happen, and I had none. I have a Buff Orpington that started going broody her third year. When chickens go broody, instinct tells them that they need to sit on eggs to hatch them out. If you have no fertilized eggs, there is no reason to allow a broody hen to sit. They will not eat or drink much and they certainly will not lay eggs. Sometimes they will attempt to sit for several months. That was the case with ‘Stephanie’, my Buff broody. I tried all summer to get her to not be broody – removed her from the nest daily; removed all eggs; put her in a small cage with a wire bottom to discourage her from laying. She was one determined little hen.

The following summer when she was four, she started being broody in May and I, once again, attempted to get her to stop. She was so determined to hatch babies, that I wanted to grant her wish of becoming a mom. What could it hurt to try? I know what it’s like to lose a baby to miscarriage and then want one so bad afterword. Sure this is just a chicken, but who am I to deny her the privilege of being a mom?

My son has a rooster and most likely his eggs were fertilized, so one night we put 9 fertilized eggs underneath Stephanie. We put her in her own little house inside the chicken pen and placed a wire crate in front of the hole. I wanted to give her protection and privacy. I knew the other chickens would get weird and want to be in with her. I also knew that they would try to steal her food and water if they could reach it.

Which works better – incubator or chicken?

I really didn’t know what to expect. I had borrowed an incubator from a friend before and tried to hatch duck eggs several times. I never got any to hatch. I was anxious to see if Stephanie could do it herself. After 21 days, as I was walking outside to do chores, I could hear little chicks chirping! God had designed those chickens to know how to keep the eggs just the right temperature with their bodies. Amazing! She hatched 8 chicks from the nine eggs. We found the final egg, with a fully formed chick that for some reason failed to hatch.

I watched in wonder as Stephanie clucked constantly at her chicks. The clucks sounded different as she was teaching them how to be chickens. She would make sounds and do something, then they would follow her and do it themselves. I loved watching them hide up underneath her feathers. She looked fluffed up and you would never know that she had her 8 little chicks hidden up inside her unless they stuck their heads out! When she was trying to protect them, she would extend her wings down to the ground and fluff her feathers, then cluck them to her. They would all scramble up inside where they were safe and warm.

The Little Hen That Could

Stephanie was a smaller hen, and was quite low in the pecking order with the other chickens. Once she became a mother, I swear she stood a little taller, walked a little prouder through the yard, as she showed off her trailing brood of babies to the other hens. No one messed with her nor came near the chicks when she was around and I like to think they were all just a little jealous of that little hen that could.

Stephanie was a great mom and had endless patience with her brood. They were so fun to watch run around, playing games on top and under their mom. When they misbehaved or tried to run away, she would cluck at them and they would come running back to the safety of her feathers.

You can tell me that it’s instinct that makes a hen go broody. That all animals have the survival instinct to keep their species going. But I like to believe that some of them really want to be moms; that the act of motherhood and purpose makes them stand a little taller, walk a little prouder. And I have the pictures and memories to prove it!

Yes, we are cheeky little brats that are spoiled a

I love decorating this tiered tray for various hol

Memories of my grandmother. Not complete or finish